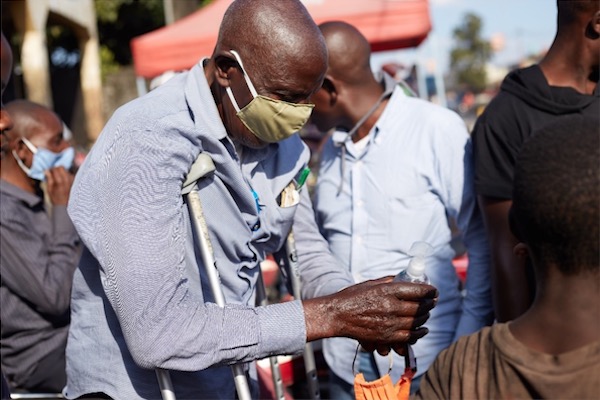 A Church Response to the COVID-19 Crisis: The Case of the Baptist Church in Central Africa (CBCA)

The Democratic Republic of Congo (DRC) is still struggling with various political and economic challenges with some parts of the country are still recovering from the trauma of Ebola. The rise of COVID-19 all over the world has not spared our country either. The first confirmed case of COVID-19 in the DRC was announced in Kinshana on March 10, 2020, and according to recent reports, almost all our provinces have been affected with an accumulation of more than 240,000 cases and nearly 700 deaths. Thousands more are still in treatment.

The DRC is experiencing challenges in containing the spread of this virus, but so far it is not as deadly as Ebola – a pandemic which the eastern part of the country still has vivid memories of. Although more than 80% of COVID-19 patients are generally progressing well, there are still concerns about the growing numbers due to the poor infrastructure of the current health system, which many fear will be inadequate to care for all these patients.  Because of our experience with Ebola in Eastern and North-Eastern Congo, the issue of COVID-19 is creating significant fear among the population, including among church members. People are living under constant fear of becoming the next victim. Preventive measures such as lockdown, the closing of churches, schools, and other public institutions dealt a dramatic blow upon the social lives of people who were accustomed to big gatherings for Sunday services, weddings, funerals, and other celebrations. Additionally, the minds of the population are further confused by wrong information inculcated by politicians who are encouraging people to resist some of the measures deigned to fight the pandemic. However, remembering the number of people who lost their lives to Ebola, people have remained open and willing to accept the recommended prevention measures, which will contribute to reducing the number of COVID-19 infections.

To help slow the spread of the virus, restrictive measures were put in place by the President of the Republic since March 2020. These measures slowed down businesses and affected traffic patterns and public transport systems. Home confinement has created problems in various households. Partners who were not used to spending the day together were forced to do so while facing tensions due to severe economic difficulties. During this time, some children seemed unaware of what was happening because many parents did not inform them of the reality. They had only been instructed not to go to school, not to attend Sunday School, not to greet or play with friends, and to stay at home – all without knowing why. Unfortunately, this sad reality has affected their behavior, feelings, thoughts, emotions, and even their faith to some extent. One thing is certain – they needed accompaniment, and that’s exactly where the church came in.

As soon as the government announced the measures to fight COVID-19, the church president wrote to all pastors to sensitize their congregants to respect these measures. Sunday services were to be held in families. The letter also included orientations for special prayers for the end of the pandemic. Thanks to social media, the pastor was able to send a program for Sunday worship. Some families managed to collect some offerings, but in rural areas, most pastors were not so lucky. However, farmers in rural areas were lucky to have almost no identified cases in their communities, and they always had the possibility to cultivate their fields and get local food. The challenge for them was getting commodities from the city such as salt, cooking oil, and other first need commodities.  Once a month, church members who could afford it were invited to bring supplies to the church for distribution to families which had nothing to eat.

In addition to those local initiatives, the CBCA, with the support of its partners, embarked on a campaign called “Jikinge na ukinge wengine” (“Protect yourself and protect the others”) whereby different activities were organized, especially to raise awareness and support for the vulnerable. In one of these activities, elderly people (especially widows and retired pastors) were given beans, maize, salt, and cooking oil. In Goma, 67 households each received 20 kilograms of rice. In other areas,during the lockdown, more than 175 households of elderly people, widows, and people living with disabilities received food support, including rice and beans but also protective masks. The police were also among the target of sensitization of preventive measures. In fact, while they were supposed to enforce the decision of the government, many of them did not wear masks. Since the lockdown was not comprehensive, the active groups such as taxi and motorcycle drivers, vendors in public markets, and traffic police officers were also given masks both for themselves but also as sensitizers. More than 8,000 masks were distributed for that purpose in each of the big cities.

In Goma, drinking water was distributed to the population of the surrounding parts of the city that are not supplied with water by the national water management system. Tanks were also installed in public places with soap and hand washing equipment to ensure that people had the means to keep their hands clean to prevent contaminations. After a few months, this activity was extended to other public places when they were partially opened. These tanks are still used by the local population.

To avoid abuses in law enforcement, more than 600 leaflets were distributed to the police and state authorities to mobilize them to respect human rights in the response to COVID-19. This was in response to many people raising concerns about the behavior of some police who were ransoming people that were found with masks and treating them without dignity. The church, therefore, played its prophetic role in promoting social justice.

In terms of sensitization, the CBCA mobilized its local radio stations in Butembo, Buturande, Goma, and Idjwi to broadcast information related to preventive measures and to sensitize people about testing. The core message was “Protect yourself and protect the others.” It also helped to prevent misconceptions and prejudices like the one that had been disseminated during Ebola teaching that the pandemic was a curse rather than a disease. The same message was transmitted through social media using WhatsApp, Facebook, and Instagram. In urban areas, the church organized online worship services, including translation in sign language to reach out to the hearing and speech impaired in the community.

Last, but not least, is the psycho-social accompaniment of people affected by the pandemic. It goes without saying that even when a person is healed from COVID-19, he/she continues to face prejudice and marginalization in the community. With the post-Ebola church response to the pandemic, the CBCA acquired enough experience to assist people who either got infected or lost their relatives in the pandemic. With this project, the church provides counseling to the “champions” (the word used locally for people who recovered from the pandemic) as well as their relatives and neighbors to facilitate social reintegration. To be most effective, counseling needs to be associated with psycho-economic accompaniment whereby those affected can be referred to associations that provide basic training on income-generating activities and small credit associations.

To summarize, the CBCA action against COVID-19 has been focused on three areas of action: the first one consists of local initiatives to keep the people worshiping and helping the most needy in line with the message of the Gospel (Acts 2:44). Secondly, the church helped the government to enforce the regulations which were announced by the president of the country for the sake of protection. Thirdly, with the support of partners, the church assisted people who had been infected or affected by the pandemic. In fact, the response to COVID-19 requires multidisciplinary and inclusive approaches, which corresponds to the integral mission campaign promoted by the CBCA. 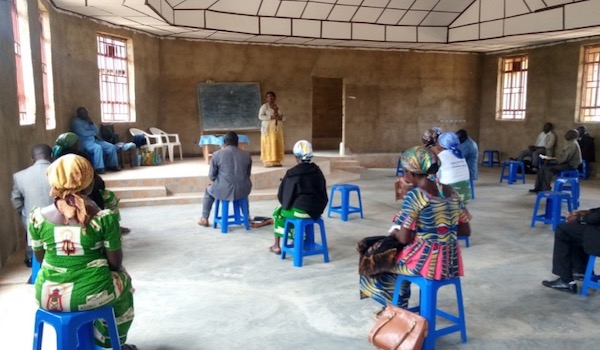 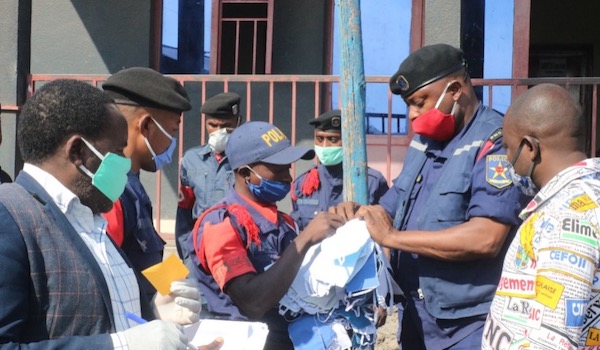 Distributing masks to the police 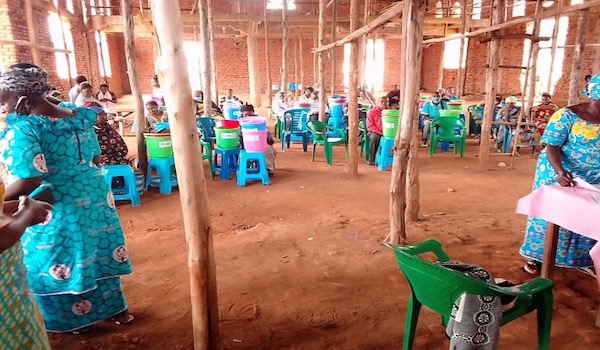 Training farmers about COVID-19 prevention and distribution of handwashing kits 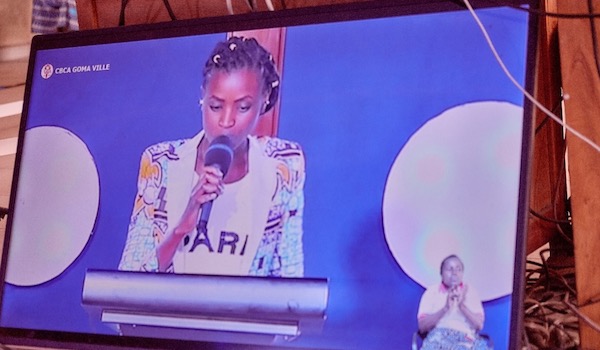 1. Just as the people of the DRC were forever changed by Ebola, how do you anticipate the lives of those in your community being forever changed by COVID-19?
2. Which one of the CBCA’s three courses of action most resonated with you and why?
3. What can be learned from CBCA’s response and applied within your context?