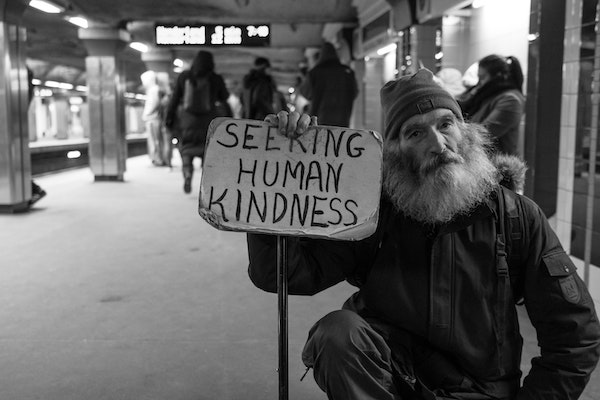 I am composing these thoughts on the day that the number of coronavirus deaths in the United States has topped a quarter of a million. In response, I want to begin with the well-known verse in Mark 6:34 where we read that Jesus saw a great crowd and “had compassion for them, because they were like sheep without a shepherd, and he began to teach them many things.” I wonder whether we often look at people in the mass as crowds, and think about them as Jesus did. T. S. Eliot wrote about the crowds going to work on a cold winter morning in London.

“Under the brown fog of a winter dawn
A crowd flowed over London Bridge, so many
I had not thought death had undone so many.”

The last line is a quotation from Dante who saw the crowds jostling on the riverbank waiting to be ferried by Acheron across the river Styx to hell. In our passage, Mark uses the Greek word splagchnizomai, which taken literally means “having one’s guts torn apart.” In some ways compassion is where mission starts, though perhaps one should immediately add that it is not where it ends. Required are not just “the passions and sentiments of the heart” but also solidarity and intervention. Jesus’s compassion, though clearly a powerful emotion, ushered in a program of action.

As the story in Mark 6:30-44 develops, we see that one important concern was that people were, or became, hungry. Food, in fact, plays a central role in Mark’s narrative. Thus, Jesus and his disciples were so busy that that they did not even have “leisure to eat.” Later, there is the question about how an evening meal is to be procured for such a great crowd, and there is the feeding itself. But food and feeding are not Jesus’s initial concern. He had compassion on the crowd because they were “sheep without a shepherd.” Importantly, Jesus did not feed them – he taught them. Also, the idea of a shepherd in Jewish literature usually referred to more than somebody out on the hillside looking after sheep. It meant a ruler or leader. For example, in Numbers 27:15-17, Moses asks the Lord to appoint someone to lead the people into battle “so that the congregation of the Lord may not be sheep without a shepherd.” Similarly, Micaiah, in a vision, sees Israel defeated in battle and “scattered on the mountains, like sheep that have no shepherd” (1 Kings 22:17). What the people lacked in both of the Old Testament references was leadership and organization. However, leadership and organization are evident in this Gospel story of the feeding of the five thousand. The people were asked to sit down in an orderly way so that the food could be easily distributed, and the leftovers were carefully collected. There is a nice progression here: compassion, teaching, organization, provision. This same verse about Jesus’s compassion and the leaderless sheep is attached in Matthew 9:36-37, not to the feeding but to the admonition of the disciples to pray for more workers to bring in the harvest. The wandering sheep and the ready harvest needed to be gathered in and restored to usefulness.

We have already noticed the shepherd reference in Numbers 27 in the appointment of Joshua. Shepherds as rulers and leaders are also mentioned in Ezekiel and Zechariah, though in both cases because they were acting unjustly. See Ezekiel 34:1-6 and Zechariah 11:4,5. The ruling class was protecting its privilege rather than the prosperity of the people, becoming predators instead of shepherds. When Jesus saw himself as the “good shepherd” (this is John rather than Mark), he was by contrast “a shepherd who laid down his life for the sheep” (John 10:11).

Another theme being invoked here is the people being fed in the wilderness. This is more developed by John’s Gospel, but it is in the background of the synoptic accounts too. The whole exodus event, like the feeding here, stemmed from a compassionate consideration of need (Exodus 3:7, 8). But the exodus was not only a deliverance from Egypt. God was determined to constitute a people. He gave them covenant and law – teaching comes first as in our story – and he established the community based on what Ched Myers calls “Sabbath economics.” At the heart of this was again the question of food, that is the manna in the wilderness. God provided this but based on fair shares for all – enough with no surplus and no hoarding. If they tried to hoard it, the food went bad which is what always happens to hoarded wealth. To put this into a modern context, here is an excerpt from a contemporary author Barbara Kingsolver in The Poisonwood Bible:

(Anatole talking to Leah about sharing.)  “When one of the fishermen, let’s say Tata Boanda, has good luck on the river and comes home with his boat loaded with fish, what does he do?”

“He sings at the top of his lungs and everybody comes, and he gives it all away.”

“Even to his enemies?”

“I guess. Yeah. I know Tata Boanda doesn’t like Tata Zinsana very much, and he gives Tata Zinsana’s wives the most.”

“All right. To me that makes sense. When someone has more than he can use, it’s very reasonable to expect he will not keep it all himself.”

“But Tata Boanda has to give it away, because fish won’t keep. If you don’t get rid of it, it’s just going to rot and stink to high heaven.”

Anatole smiled and pointed his finger at her nose. “That is just how a Congolese person thinks about money.”1

It is instructive that it is probable the Israelites were tasked with building storehouses while slaves of the Egyptians. Sabbath economics out in the wilderness with food gathered by all and “consumed at the point of need” was an example of God’s sharing justice in operation.

Another brief example from the Old Testament is an Elisha feeding story (2 Kings 4:42-4). Mark may have had this story in mind when he was writing here. The Elisha feeding story (there are several of these) took place in the context of famine. In a way, that was true of the context of Jesus’s ministry. There was “a whole lot of hunger going on.” In the Elisha story, the man brought first fruits – a sort of tithe. There is a complicated piece of intertextuality going on here. In the incident of the disciples eating grain, they were criticized by the Pharisees (Mark 2:23-8) perhaps as much for breaking the tithing laws as for profaning the Sabbath. Jesus’s riposte was that David and his companions were hungry when they broke the ritual law. Here we have part of a long-running controversy over hunger, tithing, and distribution, which were sharing issues. There are several such examples in the Gospels.

Sharing fairly (justly) does not just happen. As the disciples pointed out, feeding a multitude was no small matter. There were practicalities. They did not have enough money for a start. Let me quote Myers here:

“Twice the disciples suggest to Jesus that the solution to the hunger of the crowds is to ‘buy’ food (6:36f–the first appearance of agorazein in Mark). But Jesus’s solution has nothing to do with participation in the dominant economic order. Instead, he determines the available resources, organizes (italics mine) the consumers into groups (6:39f), pronounces the blessing (cf. 14:22), and distributes what is at hand (6:41).”2

I like the statement: “Jesus’s solution has nothing to do with participation in the dominant economic order.” (In the midst of the current pandemic, that is something of a relief!) I suspect this principle is still true today, or ought to be. Nor does the solution have much to do with the disciples’ resources. They appear to have had a certain amount of money and a small amount of food. But these were totally inadequate. I am afraid that our “riches” – stored wealth, technology, institutions – such as they are are not just inadequate but they usually get in the way. We are as the saying goes “too rich to help the poor.” So here we have a range of ideas – compassion, teaching, feeding, leadership, justice, sharing, and organization.