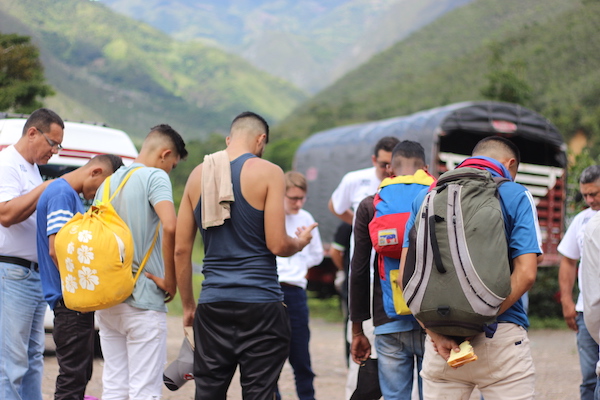 The Church and the Response to Crisis: Working with Migrants

The First Evangelical Baptist Church of Lima is 68 years old. On its 64th Anniversary, the church was confronted in its vision with the arrival of Venezuelan migrants. The question that arose in the face of this challenge was: is it possible to apply the principles we teach? The church evaluated its biblical theory in the face of Venezuelan migration. For example, how should the church apply Matthew 25:31-46; Luke 10:25-37, the parable of the Good Samaritan, and James 2:14-18?  The church, with much fear, decided to open the doors of its building to shelter homeless individuals and families.

This is how the “Ministry of Love” came about. This ministry aims to answer the question – what would Jesus do? Everything we do is in that direction, considering what the Gospels teach us about how the Lord Jesus dealt with the vulnerable of his time.

The priority of this ministry is to provide migrants with lodging, food, and clothing and to support them in the areas of health and education. At the same time, we give them spiritual assistance, teach them the good news of salvation, listen to their problems, and serve them.

The church soon realized that the Lord had brought us an important group of migrants. They have now been ministered to with the Word of God; we have witnessed decisions of faith; we have baptized; and other brothers and sisters have requested to be members of the church. Something important to highlight – during the lockdown, churches were not allowed to hold face-to-face services. However, through the Ministry of Love, we have a captive population with whom we share the message of the Gospel through our example by giving them lodging, food, and care.

The migrant-refugee comes to us with a lot of grief and needs. They have left their homeland, family, children, traditions, and employment. They consider that many things have failed: their government, their economy, the loss of their jobs, etc. But they have learned that the Word of God remains forever and that Jesus is always there to meet their needs. Thanks to God we have incarnated the Gospel. Thus, the next step is to create the First Ethnic Baptist Church.

WHAT HAPPENED DURING THE LOCKDOWN FROM MARCH 2020 TO DATE?

We have accompanied the migrant-refugees in their mourning. The pastoral office with the support team has been with them and with the external population during the 76 days of the first lockdown. Without resting, we have given accompaniment, obtaining resources to serve them in the areas of health, food, clothing, and money to send to family in Venezuela. We have had the opportunity to serve the guests of Ministry of Love every week in my office, helping with their crisis of loneliness or worries because they were left without a job. During the lockdown, two babies were born and a third baby went to surgery because of hydrocephaly. In all these cases, we have accompanied the parents in their search for solutions.

During the lockdown, the church discovered that the COVID-19 pandemic left the country with five major challenges:

These five realities have led us as a church to look for partners and friends to help us to be relevant in this reality the world is facing. Our testimony has been known by non-believing friends who have contributed to this cause. It is interesting that they have received the Word of God, not in a revival or through a sermon from a pulpit on a Sunday, but they have seen and heard us preach with facts. Likewise, some churches and Christian organizations have supported us as well as brothers and sisters in the faith. But the demand is great. The number of vulnerable persons is increasing every day, and we need more help to undertake great things for the Lord.

GOOD PRACTICES FOR THE CHURCH

The First Evangelical Baptist Church of Lima will never be the same after this pandemic. We are convinced that God opened a door of opportunity for us to serve, embodying the Gospel we preach. Our church building has become the center of operations to serve the needy.

Something very interesting that I must point out is that the church discovered that it did nothing to have more than forty people, including children, youth, and adults within the facilities of our temple. The Lord sent them. We discovered that in his grace and mercy our God considered us worthy to serve his cause, to serve the newly born.

We are very close to launching the First Ethnic Baptist Church of Lima, taking into account the population that we have housed in our building. The pastor could be a brother who was one of our guests. He is a graduate from the Baptist Theological Seminary of Venezuela.

To conclude, I quote John A. Mackay, “Strategy without reflection is fanaticism, but reflection without strategy is the paralysis of all action.”