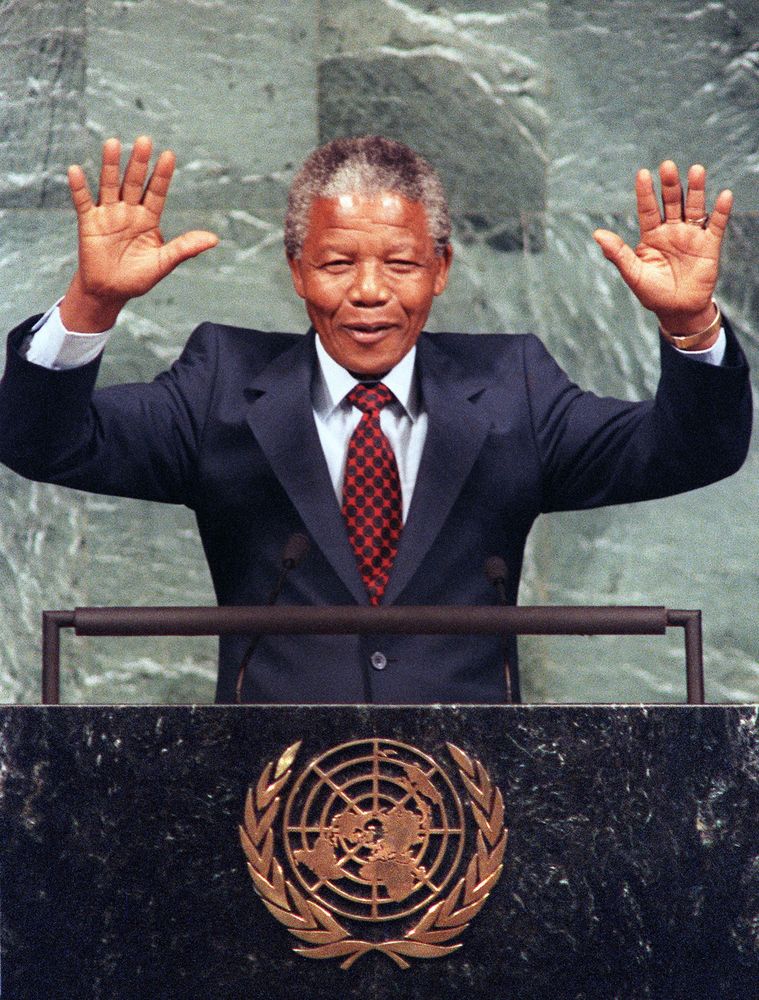 The Baptist World Alliance joins the wonderful people of South Africa in mourning the death of The Honorable Nelson Rholihlahla Mandela, the first President of a free and democratic South Africa.  In the days following his death we have all had opportunity to reflect on the significance of his life and of his convictions.  Nelson Mandela was one who not only understood reconciliation but lived it in a way that instructed all of us in its deeper meanings.  His passion for freedom was not freedom for some but freedom for all; otherwise there would be no freedom for any.

May we all hear the call of his life for peace, unity, and dignity and commit ourselves to those very values.  Nelson Mandela stood out as a giant among us in his humble way because those values are so seldom exercised in the course of human affairs.  He modeled understanding when retaliation was expected.  He demonstrated peace when many wanted war.  He extended a hand to his former enemies when distain would have been easier.  What a different world we would have if those commitments were common practices in human relationships.

Our prayers are lifted for the people of South Africa as the nation journeys through this time of grief and learn to live without a man who symbolized the heart of the people.  We also will pray for the family of Nelson Mandela. May his death renew for us this Christmas season that sacred hope found in Immanuel, “God is with us.”

As a citizen of Jamaica, the first country in the world to impose a trade embargo against apartheid South Africa — that was in 1957, when my country was still a colony of Britain — as one who was privileged to serve on the team of United Nations observers at the 1994 elections, when Mandela was elected as South African president, and as general secretary of the Baptist World Alliance, which fosters respect for human dignity and celebrates contributions made by all who work tirelessly for the triumph of peace with justice, I offer praise and thanks to God for the gift to humankind that President Mandela was.

With the passing of this great man, the world has lost a remarkable emancipator. Mandela blazed a trail of respect for human dignity and human rights. We cannot afford to forget the unbounded passion for freedom, the relentless striving for justice and the unshakeable commitment to peaceful human coexistence that Mandela exhibited.

Let us take time to ponder the legacy of this great world leader and let us be prepared, whatever the cost, to devote our lives to loving our neighbors, forgiving our enemies, and pursuing all that makes for justice and peace in our communities.

May God give strength to Mandela’s family members and to the people of South Africa in this moment of incalculable loss.

Prayer
Almighty God, you are the one who gives and who takes away. You draw near to us in our times of joy and of sadness. May we experience your peace during these days and may we also learn the many lessons Mandela’s life is meant to teach us. Amen.

Nelson Rolihlahla Mandela was truly an icon and a symbol of reconciliation.The church of God has benefited immensely from his struggle for freedom, even though South Africa was said to be a Christian country, it was still divided along racial lines. This meant that the church was not able to demonstrate the unity the Lord Jesus Christ advocated and prayed for in his priestly prayer. The mere worship of the Lord as a tenet of faith was confined to one’s race and/or homeland. He himself had very strong Christian beliefs as a product of education that was in the hands of the church and hence his roots in the Methodist church.

He is the first South African black politician to serve as the President of South Africa and the first elected in a fully representative, multiracial election. This means the majority of South Africans had confidence in his leadership due to their belief in his values and principles and political ideals.

He is set apart by far from many, if not all African leaders, who have led their people into freedom. He was not corrupt nor was he greedy. He demonstrated this by volunteering to pay tax from his income, even though the law exempted him. He also refused the temptation to hold on to power when he did not accept a second term as President.

He had a lot of respect for spiritual leaders and this was demonstrated by his taking a rebuke by Bishop Desmond Tutu for his casual relationship with Ms Graca Machel and decided to marry her in order set a good example as a statesman. Mandela’s life has been an inspiration to all, we will always cherish his values such as forgiveness, democracy and equality.

Ordinary men, women, youth and children in South Africa wished they could have him for a longer time and some still find it difficult to imagine South Africa without him.  One of his famous quote before he was jailed for 27 years: “During my lifetime I have dedicated myself to this struggle of the African people, I have fought against white domination, and I have fought against black domination. I have cherished the ideal of a democratic and free society in which all persons live together in harmony and with equal opportunities. It is an ideal which I hope to live for and to achieve.  But if needs be, it is an ideal for which I am prepared to die.”

South African and indeed the global community heard about his death on Thursday 5 December 2013. We not only mourn but celebrate the life well lived and legacy left by this man. Keep his family and this nation in your prayers.

“During my lifetime I have dedicated myself to this struggle of the African people. I have fought against white domination and I have fought against black domination. I have cherished the ideal of a democratic and free society in which all persons live together in harmony and with equal opportunities. It is an ideal which I hope to live for and achieve. But if needs be, it is an ideal for which I am prepared to die” Nelson Rolihlahla Mandela, 20 April 1964.

“What counts in life is not the mere fact that we have lived. It is what difference we have made to the lives of others that will determine the significance of the life we lead.” — Nelson Mandela

The members of the Baptist Association of South Africa mourns the passing of Nelson Rohilhlahla Mandela, “the father of democracy” also the “father of our nation” also known by his clan name “Tata Madiba” in Xhosa Tata means “father”

Madiba made the world a better place for all South Africans. He taught us to hold on to our biggest dreams and to stand firm in defence of our principles. He renewed our faith in the power of good men and women to triumph over evil. He showed us, in the way he lived his life, that the human spirit can rise above seemingly impossible odds to offer forgiveness instead of enacting revenge; to embrace peace rather than violence. He reminded us that if we stand together, united in action, we can achieve anything.

Our most fitting tribute to Madiba will be to honour the ideals to which he aspired and the values for which he fought; to keep his memory alive not only in our hearts and minds but in our actions too. We need to live the legacy, not just speak of it.

We offer our deepest condolences to the Mandela family, friends that he had throughout the world- billions of them and our prayer here in South Africa the Peace of God be upon them and the love that Madiba had for humanity will be there.

“Let not your hearts be troubled. Believe in God; believe also in me. In my Father’s house are many rooms. If it were not so, would I have told you that I go to prepare a place for you? And if I go and prepare a place for you, I will come again and will take you to myself, that where I am you may be also. -John 14:1-3

In his passing, Mr. Nelson Mandela has left a legacy not only for South Africa but for the whole world. On behalf of the Baptist Union of Southern Africa, we express our condolences to the family. We also acknowledge our gratitude to God for providing a leader who will never be forgotten.

The Apostle Paul wrote in Romans 13:4 concerning the responsibility which political leaders should exercise: “for he is God’s servant for your good.” Mr. Mandela did so in an exceptional way. He set an example to South Africa, and indeed to the world, of responsible leadership that is committed to service and not to personal power or gain. He devoted his life to South Africa and all its peoples.

Throughout his life Mr. Mandela strove for justice for everyone in South Africa. His willingness to forgive those who had wronged him almost certainly saved South Africa from a bloodbath of catastrophic proportions. Our beloved Madiba consistently pursued the goals of fairness, reconciliation and unity. Mr. Mandela was a leader of principle. He was also a man of deep humanity, humility and compassion. Everybody loved and respected him – and we shall all deeply miss him.

Mr. Mandela will always be remembered as the father of our nation, the new South Africa, the Rainbow Nation.

We thank God for Nelson Rolihlahla Mandela, an outstanding leader with a remarkable legacy.

The people of the Caribbean Baptist Fellowship in particular and the Caribbean region in general, join our brothers and sisters on the African continent and the rest of the world in mourning the passing of a great liberator — Nelson Mandela.

The parallels between both regions — Caribbean and Africa — are well known in terms of our common experience of exploitation, oppression, racial prejudice and victimization. Therefore, Caribbean people identified with Mandela in his struggle and protest against the dehumanizing exploits of oppressive principalities and powers.

The Caribbean Baptist Fellowship pays tribute to Mandela as a great liberator, a fearless defender of truth, freedom and justice and an example of courage, persistence and faithfulness to a just cause to the rest of the world. As we eulogized him may we be inspired to fight against every form of oppression, victimization and prejudice as a fitting tribute to his memory.

We have learned with sadness of the passing away of former South African President Nelson Rolihlahla Mandela.

Nelson Mandela’s engagement in transforming the South African society, in achieving change and reconciliation is a witness of his standing as a statesman a role he lived with humility. His life and achievements continue to remain an inspiration for people all over the world. May we all be inspired and motivated by hearing his call for human dignity and peace.

Our prayers are lifted for the family of Nelson Mandela and for the People of South Africa at this time of grieving.

We the Progressive Bethel Baptist Church meeting during our time of worship yesterday and responding to the President’s call to use part of the service as a time of reflection and prayer for the Mandela family, want to: