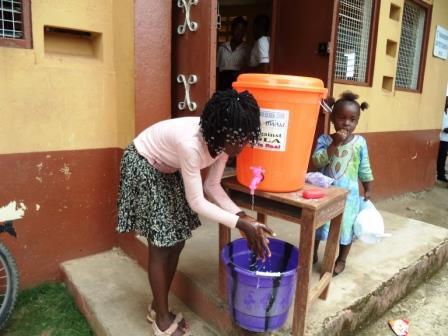 “It is with a great joy and praises to the Almighty God that Sierra Leone, on Saturday, 7 November, has been declared Ebola free by the World Health Organization (WHO) at a colorful ceremony at the Bintumani International Conference Centre in Aberdeen, Freetown.”

It was with these joyful words that Samuel Conteh, coordinator of social ministries for the Baptist Convention of Sierra Leone, wrote the Baptist World Alliance (BWA) in November 2015.

“WHO made this declaration after the country has gone through the 42 days incubation period without registering a case of Ebola. The declaration was made by WHO country representative Dr. Andres Nordstrom,” Conteh declared.

“Every district and most chiefdoms have had firsthand experience of this terrible disease. A total of 8,704 Sierra Leoneans were infected during the outbreak and we lost 3,589 of our brothers and sisters, our mothers and fathers and our sons and daughters. We lost 221 healthcare workers, including 11 doctors,” he elaborated.

“Please join us to remember all those who lost their lives and I pay special tribute to our healthcare workers and other Ebola Response Workers who made the ultimate sacrifice, losing their lives as they tried to save the lives of others. May their souls rest in perfect peace.”

Conteh told the BWA that the work continues, including doubling citizens’ access to water, drastically reducing maternal and child mortality, creating sustainable jobs and reducing the size of overcrowded classrooms, in addition to a “comprehensive package of support for 4,051 Ebola survivors which will include free healthcare and psychosocial support.”

He extended thanks to the Baptist World Alliance (BWA) and the worldwide family of Baptists for their assistance and prayers. “We are very grateful for your support and may the grace of our Lord and savior Jesus Christ be with you all. My special thanks to you and your team for the wonderful job you did in the fight against Ebola in Sierra Leone. I say bravo and thank you for your support.”

“We praise God and celebrate with you and the people of Sierra Leone for this wonderful news,” said Rothangliani Chhangte, director of Baptist World Aid (BWAid). “While we are saddened by the loss of so many lives, especially those in the medical profession who served their people so valiantly in the face of such a dreadful disease, we hope that the country will come out stronger and more united.”

Liberia, another country that was badly affected by the Ebola virus in 2014 into 2015, was declared Ebola free in May 2015. More than 9,550 Liberians were known to have contracted the disease with almost 4,300 having died as a result of the outbreak.

BWAid, the relief and development arm of the BWA, had extended significant assistance to both countries in the fight against Ebola.