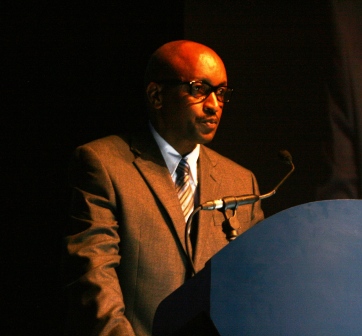 The fifth Congress Human Rights Award was presented by the Baptist World Alliance (BWA) to Rwandan Corneille Gato Munyamasoko, general secretary of the Association of Baptist Churches in Rwanda (AEBR), during the 21st Baptist World Congress in Durban, South Africa.

Munyamasoko was recognized for his work in peace and reconciliation after the 1994 genocide in his country.

The Rwandan Genocide was a mass slaughter of Tutsi and moderate Hutu in Rwanda by members of the Hutu majority. During the approximate 100-day period from April 7 to mid-July 1994, an estimated 500,000 to 1,000,000 Rwandans were killed, constituting as much as 70 percent of the Tutsi and 20 percent of Rwanda’s total population.

A citation read at the presentation on July 23 described Munyamasoko as a strong advocate; a prophetic witness; a champion of the vulnerable; and as a reconciler, peacemaker, pacifist and mediator.

BWA General Secretary Neville Callam, who read the citation, declared Munyamasoko a committed Christian who has drawn “upon biblical theology, integral mission, training and community development to assist groups and persons to overcome national rivalries and ethnic differences.” The Rwandan Baptist leader, who was born to exiled parents in the Democratic Republic of the Congo (DRC), is “driven by the idea of the church as a home of peace.”

He was instrumental in leading groups in Rwanda “to consider the painful background of Rwanda’s ethnic divisions in the quest to overcome the destruction of social groups victimized by suspicion and lack of trust.”

Munyamasoko led Rwandans “to understand the causes of the genocide; to seek and to extend forgiveness; and to build relationships based on the principles of justice, mercy and faith, emphasizing the need for reconciliation with God, self and others.”

Initiatives led by Munyamasoko include the launching of peace and reconciliation clubs in each of the secondary schools of the AEBR, confronting suspicion and hate among teachers and students within these institutions.

He also helped found a peace camp movement, now recognized by the Rwandan government, which brings young women and men together from various provinces in Rwanda, advancing conversations between survivors of genocide and those whose parents were imprisoned for acts of genocide.

He has trained and mentored hundreds of youth and young adults to become peacemakers and reconcilers on the basis of an understanding of justice drawn from the Bible.

Munyamasoko has worked to mediate peace on both sides of the border between the DRC and Rwanda during times of tension between the two countries.

He extended his peacebuilding role to Kenya, visiting and working with Kenyan church leaders after the 2007 election violence and, in 2013, helping churches prepare to serve as agents of peace in preparation for the Kenyan national elections.

Under Munyamasoko’s leadership, the AEBR participates in the fight against stigma associated with HIV and AIDS, training pastors to become role models for caregivers of those infected and affected by HIV and AIDS.

Munyamasoko paid tribute to all those who helped and worked with him, including friends, colleagues and acquaintances in the DRC and Canada, as well as to his wife, Anne Marie, “my very good friend for 22 years,” and their seven children.

“This award is recognition of the resilience of all Rwandans,” he said. “The award is a great encouragement to me to continue to strive for the wellbeing of my brothers and sisters. I feel reenergized in the calling to work for peace.”

Some 2,500 Baptist Christians from more than 80 countries are in South Africa attending the 21st Baptist World Congress.