Peace and freedom in Christ 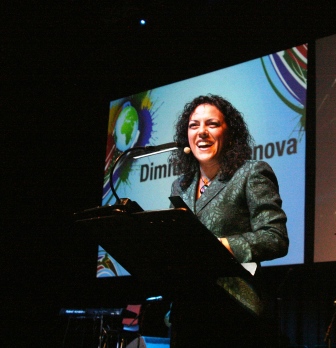 Persons can experience freedom in the midst of turmoil and peace in the midst of conflict, declared Dimitrina Oprenova during the 21st Baptist World Congress in Durban, South Africa.

Oprenova, from Bulgaria, said Christians in her country experienced peace even during the turbulent communist era.

She told of the faith of her mentor, former Bulgarian Baptist pastor and leader, Ivan Angelov, who was sentenced to prison for eight years, “a man tortured by the communists.” After one particularly terrible episode of being beaten, Angelov, broken and believing he was dying, bemoaned the state of the church and cried out to God in desperation. “God, they have destroyed me, this is the end,” she recalled him saying. “God, what will happen to the church? We are all here, there is no pastor out there, what will happen to the flock?” whereupon a man dressed in white came to him in his cell and declared, “Ivan, this is my church, I will take care of it. And I will take care of you. You don’t worry about it.”

That vision of Christ in his prison cell gave Ivanov strength to endure and to be an inspiration to others, including Oprenova, associate minister of the First Baptist Church in Sofia, president of the Bulgarian Baptist women’s organization and a member of the board of the European Baptist Women’s Union. “The powerful became weak, but this broken, weak man, in the midst of evil circumstances, received strength,” she said. “He lived; he came out of prison and continued to serve God. He lived long enough to be an example for me too.”

Oprenova said “sometimes the Lord calms the storm. Sometimes he lets the storm rage and calms his child.” She told the gathering of Baptists from more than 80 countries that “whatever the circumstances, whatever culture we come from, wherever we are, we can be free to live without regret and fear.”

If persons give place to fear, she said, this can rob them of their freedom. “Fears of the past and of the future paralyze us and rob us of the power of serving God.” Oftentimes, the fear “stems from selfishness, from being overly concerned about our own self-preservation [and] self-image.”

God, in essence, saves us “from ourselves, from our own pride and selfishness, from our wrong decisions, from our social prejudice, from our judgment of others, from our hatred and brokenness.”

Video of the plenary worship service may be viewed on the BWA website at www.bwanet.org.