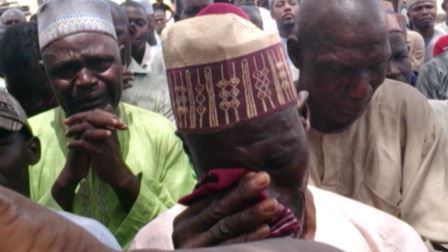 Samson Ayokunle, president of the Nigerian Baptist Convention (NBC), has castigated the international community for ignoring terrorist violence and attacks in the West African country.

NBC is the largest Baptist World Alliance (BWA) member organization in Africa with approximately 3.5 million members in some 10,000 churches.

“My consternation is in the attitude of the international community toward the huge destruction going on in Nigeria,” Ayokunle told the BWA. “The earnestness with which they intervened in the ISIL attack in Syria and Iraq, or the Taliban problem in Afghanistan, etc., is not shown in the case of Nigeria.”

He accused the world community for devaluing Nigerian lives. “Does it not matter to the rest of the world if Boko Haram continues to kill hundreds of people every week? Are these people less human than those being killed in other place where they have gone to directly intervene? My people are being killed like animals and the whole world is just watching.”

Ayokunle was responding to the latest spurt of attacks by Boko Haram, a jihadist group that seeks to establish Sharia law in Nigeria.

Boko Haram conducted the Baga massacre in the northeastern Nigerian state of Borno in early January this year causing an unknown number of deaths, though estimates range from dozens to more than 2,000. In April 2013, more than 185 people were killed and more than 2,000 homes in Baga were destroyed as a result of fighting between the Nigerian military and Boko Haram.

Up to 2014, the group killed more than 5,000 civilians in attacks occurring mainly in northeast, northcentral and central Nigeria. Since 2009, Boko Haram has abducted more than 500 persons, including the kidnapping of 276 schoolgirls from Chibok in April 2014. An estimated 1.5 million have fled their homes because of threats and attacks.

“The situation is pathetic.” Ayokunle declared. “The main targets in all these attacks are the Christians first and any other person that opposes them. Any town they enter, after killing the Christians there, they go ahead to bring down all the churches there sparing the mosques. Major Christian cities such as Gwoza and Mubi among others have fallen to them. Christians in cities such as Michika and Baga are also on the run.”

The Nigerian Baptist leader said “the church is under siege of severe persecution.” Baptists have been directly affected. “No Christian church is standing anymore in Mubi where more than 2,000 Baptists fled the city through Cameroon when Boko Haram attacked.”

These Baptist Christians, he said, returned to Nigeria through another town called Yola in Adamawa State but never to their homes again. “They have become displaced and are now living in displaced people’s camps scampering for food, without decent accommodation and naked.”

Ayokunle said Baptist buildings, including the offices of the secretariat of Fellowship Baptist Conference of the NBC, was burned in Mubi, and the home of the conference president was vandalized. The conference president and Baptist pastors have fled to the city of Jos in Plateau state, another region that has been attacked by Boko Haram. “Our Baptist High School in  Mubi has been closed while our Baptist Pastors’ School in another neighboring town, Gombi, was indefinitely shut down.”

He expressed appreciation for the prayerful support of Baptists and other Christians and requested financial support to assist those who have been displaced by the terrorist attacks. “Continue to join us in prayer so that the gates of hell might not prevail against the Church of Christ in Nigeria.”