Knud Wümpelmann, former president of the Baptist World Alliance (BWA) passed away Tuesday, June 2, at the age of 97. The Baptist World Alliance calls upon Baptists worldwide to join in prayer for his family and to honor his legacy of faithful ministry.
After answering God’s call to ministry, Knud studied at the Danish Baptist Theological Seminary at Tølløse, Denmark, and went on to have pastorates in Jutland and in Copenhagen before being called as the first General Secretary of the Danish Baptist Union in 1964. After sixteen years in this role, he became General Secretary for the European Baptist Federation (EBF) and served in that capacity from 1980-1989.
His leadership demonstrated deep commitment to the unity of Baptists across the EBF, especially to Baptists of Eastern Europe then under Communist rule. He made around twenty visits to the then Soviet Union, and it was during his leadership that a project of the EBF Books and Translations Committee and Eurolit came to fruition – to place a set of the William Barclay New Testament Commentaries, translated into Russian, into the hands of every Russian-speaking pastor to support their preaching ministries.
“We give thanks for this faithful servant of God, Knud Wümpelmann, and the fine example he gave to Danish, European and World Baptists of Christian statesmanship based on his own deep commitment to follow Jesus Christ throughout his long life,” said Tony Peck, EBF General Secretary. “The hallmarks of Knud’s ministry were apparent; a caring pastoral approach to leadership; a gifted organizer, a reconciler and peacemaker, all with an ecumenical commitment to work together with Christians of other traditions.”
After retiring as EBF General Secretary, Wümpelmann was elected to serve as the President of the Baptist World Alliance, a position he held from 1990-1995. In this role, he took a special interest in the BWA’s commitment to human rights and religious freedom, which included representing the BWA as an international observer at the first democratic elections in South Africa in 1994 and helping serve Baptists in eastern Europe during a season of significant change.

“For many years, Knud was an advocate for a united Baptist community in a politically divided Europe. He didn’t just pray ‘Your Kingdom come’, he was an accomplished advocate for the coming of God’s Kingdom in eastern Europe,” said David Coffey, BWA President (2005-2010). “He saw the dawn of a new era before the walls came down. He had made numerous visits behind the Iron Curtain, so when the new Europe came into being at the beginning of the 1990s, as a profoundly relational pastor, he was the perfect BWA President to welcome the numerous new members from the Eastern bloc.”

Through his ministry presiding over the 17th Baptist World Congress, Wümpelmann developed a special relationship with Argentinian Baptists.
“During his presidency, we had the honor and privilege to organize and receive in Buenos Aires the 17th World Congress that brought together more than 10,000 delegates from all over the world,” said Raúl Scialabba, former BWA Vice President. “Knud knew how to give the gospel message whatever his audience, and at the same time serve millions of Baptists with the presence of a diplomat. Twenty-five years after that unforgettable Congress for many Argentinians, we remember him and thank God for his life and for his legacy.”
Wümpelmann’s legacy of impact is indeed far-reaching, including inspiring the men who would follow in his footsteps as BWA Presidents.
“I remember Denton Lotz, the former General Secretary of the BWA, referring to President Wümpelmann as a world pastor. All who attended the Buenos Aires Congress could give testimony to that. I marveled at hearing stories of his courageous support of the Baptist churches in the former Soviet Union, building bridges and connections that last to this day,” said John Upton, former BWA President (2010-2015). “It was leaders like Knud Wümpelmann that modeled for so many us the essential values of leadership and global pastoral sensitivity. He had an innate intercultural intelligence that made the BWA global in character.”
Despite his long and far-reaching ministry, he was always quick to deflect personal attention in order to place the focus solely on God. When asked what he wanted his presidency to be remembered for, Wümpelmann said: “My ‘presidency’ is not so important! What counts is God’s mercy to His people and of that we have received a great deal: the growth of our membership…, the unity in diversity strong enough to keep us together, the help in times of great distress…, and the gift of hope for a great future.” His final message to the global Baptist family included within Baptist World Magazine in April 1995 remains as relevant today as when it was first written: “Love one another, because love won another!”
Wümpelmann is survived by his loving wife of 73 years, Karen; their two sons Jørgen and Mogens; his daughter-in-law, as well as grandchildren and extended family. A memorial service will take place at the local Baptist church in Tølløse where Knud and Karen met, were married, and have served as members since their retirement.
“I am so grateful for the long line of leaders within the BWA who have led well,” said Elijah Brown, BWA General Secretary. “May the Lord be with his family, and may the Lord help us live into Knud’s legacy of grace, concern for the poor and dispossessed, and encouragement to all.” 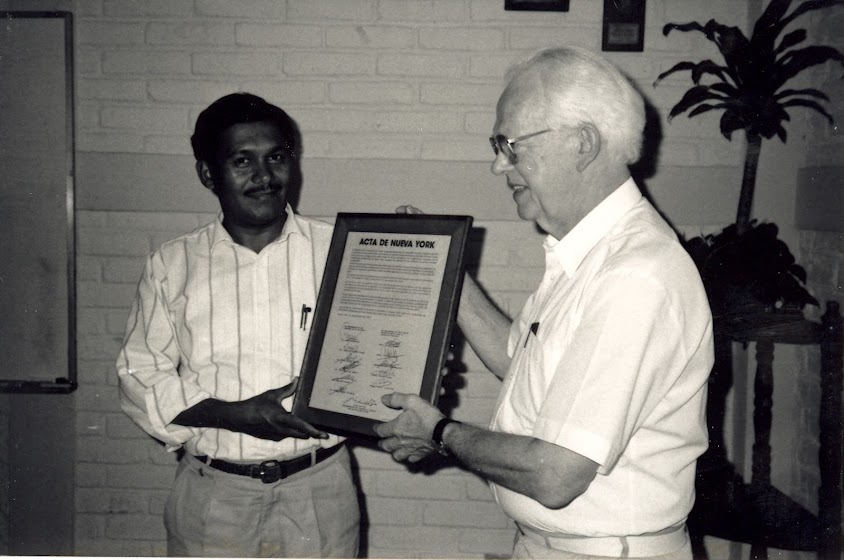 Knud Wümpelmann honored during a visit to Cuba. 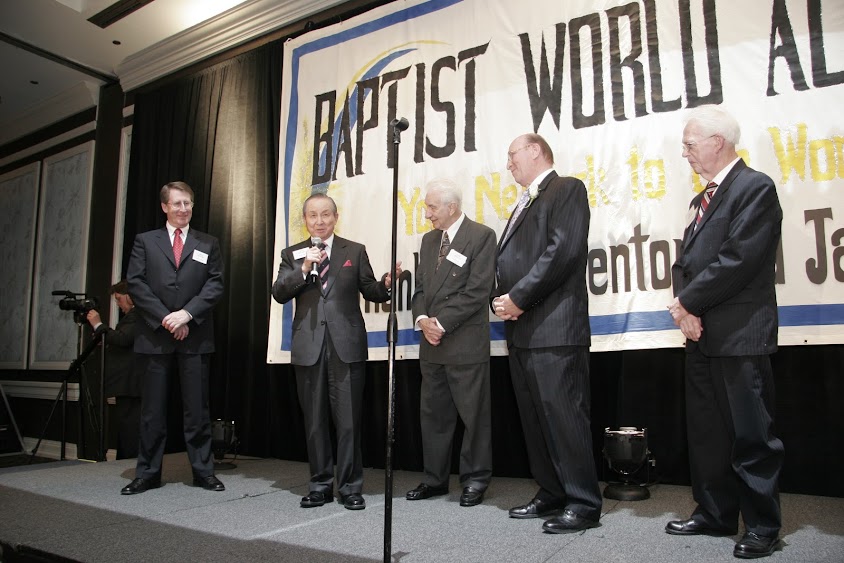 Knud Wümpelmann joins with other BWA presidents (David Coffey, Billy Kim, Noel Vose) in celebrating the retirement of former BWA General Secretary Denton Lotz.
Share your favorite memory of President Wümpelmann or a tribute to his ministry. The memories will be compiled to share with the family.