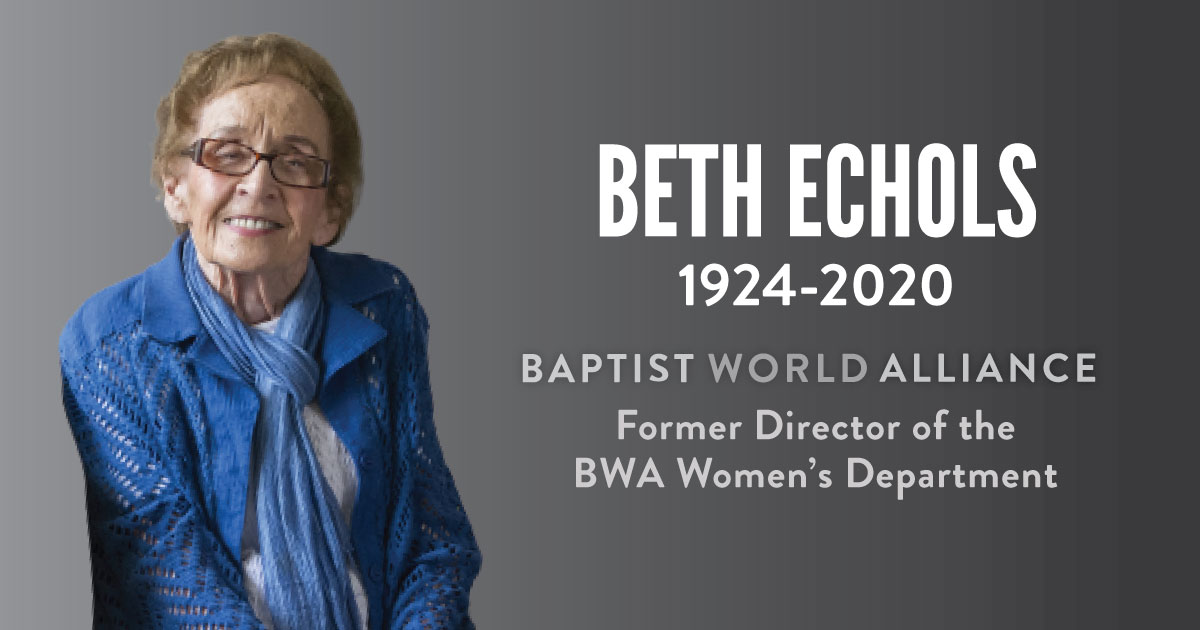 Beth Hayworth Echols, former director of the Baptist World Alliance (BWA) Women’s Department and passionate advocate for her global neighbors, died December 10 at her home in McLean, Virginia, USA, at the age of 96. While serving at the BWA from 1986-1995, she was known as Beth Hayworth MacClaren. The BWA calls upon all Baptists to remember and honor her legacy of hospitality and human rights advocacy and to pray for her family during this time.

“Beth Echols had a heart for the world. Long before she took over her role as Executive Director of the BWA Women’s Department, she was loving and caring for international people right around her. This made her a natural fit for the role of Executive Director,” said Moreen Sharp, Interim Executive Director for BWA Women. “Her tenure was a time of great change in the BWA as well as on the global scene, but she provided a strong foundation – working faithfully with her team, addressing women’s issues, and drawing women together to make an impact in the world. Her work paved the way for the future, and we have been blessed by her faithfulness.”

Born in 1924, Echols grew up on a tobacco farm in North Carolina, often completing her chores while reading any book she find. Her childhood church, Abbots Creek Missionary Baptist Church, instilled in her the unshakable belief that God loved her and all the children of the world which guided her professional path.

Echols had hoped to become a foreign missionary. When that door remained shut after her graduation from Mars Hill College, she enrolled in the Women’s Missionary Union Training School in Kentucky and graduated in 1949 with a Bachelor of Religious Education. After graduation, she began her long career of employment at Baptist organizations, always looking for ways to serve her neighbors at home and abroad.

Like many young female Baptist leaders, her first job in Baptist life was through the Baptist Student Union (BSU). Her first ministry position was as the BSU director for Eastern State College where she was responsible for nurturing the spiritual environment for 500 Eastern students who were Baptist. In 1953, she moved from Eastern into a statewide leadership position as the Associate Student Secretary for Kentucky’s Student Union Department. Echols describes her greatest accomplishment in this position as creating the first retreat for international students, which became an annual event in Kentucky and spread to other state BSU departments. Echols would first connect with BWA in this role while attending the 1958 Baptist World Youth Conference in Toronto, Canada. In total, Echols worked 11 years in Kentucky, frequently speaking to students across Kentucky and in neighboring states.

In 1960, Echols left Kentucky to become the associate state director of student work for the Louisiana Baptist Convention (LBC). The LBC had recognized the need for ministry to international students, and Echols was eager to grow this work on college campuses across the state. In this role, she reconnected with BWA at the Baptist World Youth Conference in Beirut, Lebanon, in 1963.

Echols’s work with international college students was a direct challenge to segregation in Louisiana and came to the attention of the (white) Citizens’ Council in 1964. African students often asked Echols about the mistreatment of African-Americans by so many who claimed to be Christians. To address these concerns, Echols began inviting American students, both black and white, to the events for international students. By the 1964 retreat, several students from Grambling College and other schools in Baton Rouge and New Orleans were attending.

The Citizens’ Council heard that Baptists had hosted a mixed-race event over the 1964 Thanksgiving holiday break, and two of their leaders came to Alexandria to demand answers. Echols was the only employee willing to speak with them, and the article they wrote about the meeting eventually cost her a job she loved.

The December 31, 1964, issue of the Citizens’ Council newspaper, The Councilor, led with the story “Baptist Student Leader Praises Negro Agitator.” The article describes, but does not name, the international student conference as follows: “A recent Baptist-sponsored conclave of college students held in New Orleans had a strong Basin Street flavor, with dark skinned boys and light girls meeting on a social basis.” The article quotes Echols as believing that “Martin Luther King will go down in history as the Greatest Christian of our Time,” and that, even in the context of interracial marriage, she believed that everyone had a right to choose whom to marry. The article summarizes the meeting: “Miss Hayworth was genial and in no mood to offer excuses. With straightforward honesty she told her segregationist visitors that she admires Dr. King, believes in intermarriage and actively participates in social integration. She said she based all these beliefs on her own interpretation of the scriptures.”

Among the 117,000 nationwide subscribers were numerous Louisiana Baptist pastors and lay leaders who began writing the state convention in early 1965 demanding an explanation. Some were supportive of Echols’s views and encouraged the denomination to take a strong stand against the Citizens’ Council, but most were highly upset that a denominational employee would bring shame upon the convention in this way. Despite the support from several Southern Baptist Convention leaders and Louisiana churches like St. Charles Avenue Baptist in New Orleans, she could not withstand the backlash. Some of the critical letters contained death threats while others threatened a reduction or elimination of their Cooperative Program giving if she remained a staff member.

The Councilor would run at least two more articles on the subject, so by the summer of 1965 Echols knew she could not stay in Louisiana. She describes 1965 as her briar patch and was ever grateful for the Baptist World Alliance meeting in Miami, Florida, USA, that summer where she accepted Jane and Bob Denny’s offer to live with them in Arlington, Virginia, USA, and seek employment opportunities in the nation’s capital.

Echols began her D.C. career at Baptist Joint Committee for Religious Liberty (BJC), then called Baptist Joint Committee on Public Affairs. For seven years, she was the BJC’s assistant director of information services, which also allowed her to be a staff writer for Baptist Press. As an accredited newswoman in the 1960s, Echols was a pioneer covering Congress, the U.S. Supreme Court, and other political news coming out of the capital. Her articles at Baptist Press, particularly those related to hunger, poverty and women’s issues, were published in religious and secular news outlets across the country.

Echols left BJC to work in local churches in the D.C. area. In 1979, Echols came to McLean Baptist Church in McLean, Virginia, USA, where she began an international ministry that continues to this day. Echols remained an active member of McLean Baptist when she accepted the position of director of the Women’s Department of the Baptist World Alliance in 1986.

Her love of people, travel, and all things international were fully indulged at BWA. She visited more than 50 countries during her tenure and was a prolific writer keeping up with Baptist women around the world. In addition to introducing the stories of international Baptist women to North American audiences by writing their stories for American and Canadian publications, Echols stabilized the member connections of the Women’s Department.

At the 1989 BWA Commission on Christian Ethics in Zagreb, she presented a trailblazing paper on the issues Baptist women around the globe were facing. Dividing the report into global geographic regions, Echols discussed the basic survival issues women face, their roles in their churches, views on ordination and obstacles to overcome. Echols noted, “Women want to move from what they perceive to be ‘servitude’ to ‘partnership’ and, with men, find a true servanthood within the church.” Echols also created and published the first Women’s Department directory in 1993. Tracking down the names and contact information of all the women’s unions and their leaders who were part of the formal and informal BWA network was an enormous undertaking.

Echols officially retired from BWA on July 31, 1994, at a gala party in Uppsala, Sweden, with Baptist women from around the globe in attendance. Since her successor had not yet been named, Echols remained at the BWA through March 1995, finally stepping down from paid professional ministry at the age of 70.

Another milestone for Echols early in her BWA tenure was to be ordained to the Gospel ministry on June 26, 1988, by McLean Baptist Church. Ordination was something she had considered but never before pursued. Echols agreed only after prayerfully considering its potential impact on the various international Baptist women leaders she was leading, supporting, and encouraging. In a scenario reminiscent of her Louisiana departure, a number of male Baptist leaders tried to stop her ordination by calling her and contacting the leadership of BWA to lodge their objections. This time they did not succeed, and she was ordained almost 40 years after finishing her seminary studies.

Upon her retirement, Echols’s commitment to international ministry was honored in various ways. The Women’s Department established a fund in her honor to assist African Baptists in purchasing a headquarters for the All-Africa Baptist Fellowship and provide relief in Rwanda. In 2000, McLean Baptist Church dedicated a large Sunday School classroom to Echols’s ministry, renaming it the World Missions Center. The room is decorated with more than 300 items Echols acquired while working for the Women’s Department. Still in use, it is a beautiful testament to the diversity and commonalities of Baptist groups from around the world, and the legacy of one woman whose ordinary acts of consistent obedience brought them into a little more harmony with one another.

Echols is preceded in death by her first husband, Robert MacClaren (1986), and her second husband, Pat Echols (2012). She is survived by family in Virginia and North Carolina and many friends around the globe. Memorial service details are forthcoming. Donations to memorialize Beth Hayworth Echols can be made at BaptistWorld.org/give.

Note: Special thanks to Jennifer Hawks for her diligent work in researching and chronicling the life of Beth Echols and for her service as the primary author of this release.

Share your favorite memory of Beth or a tribute to her ministry.