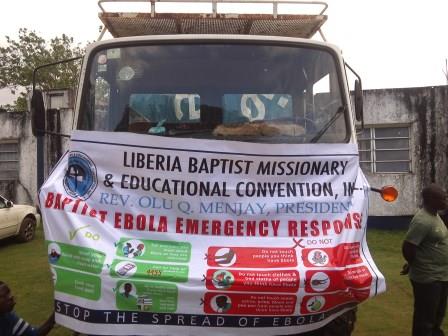 The Ebola epidemic in Liberia has led to the shutdown of many activities in the West African country.

A state of emergency has been declared, the capital Monrovia is under curfew, schools are closed, only essential government services are being provided and private businesses and offices have scaled back production and services.

The BWA sent an initial sum of US$10,000 to Liberia with additional sums earmarked to counter the growing menace.

“We are struggling through one of the most difficult periods in the history of our country,” Justus Reeves, general secretary of the Liberia Baptist Missionary and Educational Convention (LBMEC), told a roundtable hosted by the Baptist World Alliance. “Currently Liberia is the epicenter of the Ebola virus on the continent.”

Unemployment, which was already 85 percent, got worse with the scaling down of government services. Government is the largest employer in the country.

Reeves said Liberia has only 51 doctors for a population of more than four million. There is a desperate shortage of medical supplies, including medicines for ailments other than Ebola.

Reeves told the BWA roundtable, which included donors and representatives from Guinea, Sierra Leone and Liberia, that the “disease has affected every aspect of our lives, politically, socially, economically, even spiritually…everyone lives in terror and fear of each other.”

An immediate concern is the threat of hunger.

Liberian Baptists have been engaged in four initiatives: sensitization and education campaigns; the provision of sanitation equipment and materials to churches and communities; food relief; and trauma counseling for families and communities.

Thus far, LBMEC distributed 650 large bags of rice to three counties and 50 bags to a hospital that had run out of food for its patients. In addition to the food distribution, Liberian Baptists are preparing and distributing meals to Ebola patients.

Baptists have been directly affected by the Ebola outbreak, including the families of 25 Baptist pastors. Baptists, including pastors’ spouses who are medical professionals and practitioners, have contracted the disease.

On September 8 the World Health Organization warned the number of new cases in Liberia was increasing exponentially. As of September 12, more than 2,000 Ebola cases have been reported in Liberia with more than 1,200 succumbing to the disease.