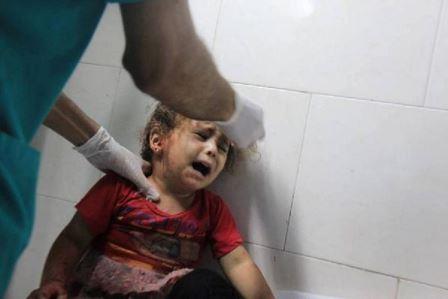 Baptists in Gaza are appealing to Baptists and other Christians to pray for their city that endured a month of heavy fighting between Israel and Hamas.

“Due to the desperate situation which is unfolding in Gaza, I must write to you again to ask for more prayers,” wrote Hanna Massad, former pastor of the Gaza Baptist Church who lives in exile in Amman, Jordan. “Fear is everywhere and nowhere is safe.” He reported that neighbors have taken shelter in his Gaza home.

“Many people are running out of food,” Massad stated. He has put a relief plan in place in collaboration with the Gaza Baptist Church. Thus far, his food relief efforts have been extended to 130 Christian families and preparations are in place to help some 1,000 Muslim families, but only half that goal has been met. Each food package, he says, costs US$60.

The Greek Orthodox and the Catholic churches, Massad said, “have opened their doors to refugees who have fled from the bombing. Some flee because their homes have been destroyed, others because the IDF (Israeli Defense Forces) has told them to go because their area is about to be bombed.”

He said the current war is the worst the city has experienced. “The situation in Gaza is much worse than during any other conflict before. I was on the telephone to some friends in the church in Gaza and on the phone these dear brothers are breaking down in agony due to the trauma they are suffering from the constant bombardment. Even amongst those who have not been killed, many lives will never be the same again.”

An escalation of the Israeli-Palestinian conflict began following a series of events, including the continued blockade of the Gaza Strip by the Egyptian and Israeli governments, continued rocket attacks from Gaza, the kidnapping and murder of three Israeli teenagers, the subsequent kidnapping and murder of a Palestinian teenager and the arrest by Israel of nearly all of Hamas’ West Bank leaders.

On July 8 the IDF launched Operation Protective Edge in the Gaza Strip. Approximately 1,880 Palestinians have died and about 10,000 wounded, 80 percent of them civilians. Sixty four Israeli soldiers and three civilians have died, while 651 IDF soldiers and 23 civilians were wounded.

The war claimed its first known Christian casualty, Massad reported. “Mrs Jalila Ayyad became the first person from the Christian community to lose her life under the bombardment from Israeli bombing. Her son has also been seriously injured. This is just one of so many tragedies happening now in Gaza on a daily basis.”

As of August 5, the United Nations Office for the Coordination of Humanitarian Affairs stated that in the Gaza Strip, 520,000 Palestinians, approximately 30 percent of Gaza’s population, may have been displaced, of whom 273,000 were taking shelter in 90 schools. More than 485,000 internally displaced persons are in need of emergency food assistance.

Massad urged Christians everywhere to pray for the end to the conflicts; for churches that have opened their doors to those who are displaced; for those who are offering relief; for those who have been traumatized; and for the family of Jalila Ayyad.

He also asked for prayer “that Christians will be strong in faith and be seen as beacons of hope and love” and “that, in the midst of war, the believers will know the peace that only Christ can bring.”