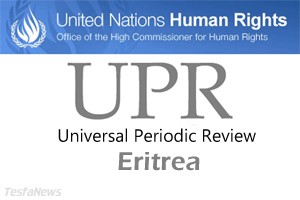 The Baptist World Alliance was one of several nongovernmental organizations whose findings were incorporated into a report issued by the United Nations (UN) on Eritrea in June.

BWA and other NGO findings were referred to in the UN report as “testimonies and confidential submissions” that were made to the UN on Eritrea. The BWA submissions were made during the Universal Periodic Review (UPR) of the East African country by the UN in Geneva, Switzerland, in February 2014.

“For more than two decades the Eritrean regime led by President Isaias Afwerki and the Popular Front for Democracy and Justice has systematically committed flagrant abuses of human rights,” the BWA said in its complaint. “While violations are broad, perhaps no community has suffered more thoroughly and completely than the numerous adherents of religious communities deemed unacceptable by the illiberal government, most especially evangelical Christians.”

The BWA alleged that there were between 2,000 and 3,000 religious prisoners in Eritrea, the majority being evangelical Christians. Religious prisoners, the BWA asserted, are frequently beaten and tortured, denied legal recourse and medical aid, and are held in deplorable conditions such as in underground cells and metal containers.

While evangelical Christians are especially targeted, the BWA said other Christians have also experienced persecution. Abune Antonios, who is in his eighties, was removed from his position as Patriarch of the Eritrean Orthodox Church and has been under house arrest since 2006 without charges. The BWA submission to the UPR claimed that Muslims were also being persecuted.

After the UPR, the UN Human Rights Council established a Commission of Inquiry (COI) on Eritrea in June 2014 to investigate the widespread and systematic violations of human rights and fundamental freedoms in the nation, which gained its independence from Ethiopia in 1991 after a 30-year war for independence. The BWA report, which provided background for the UPR, was included in the bibliography of the UN COI report as a background piece.

In addition, separate firsthand testimonies were used by the UPR. These testimonies were collected by Elijah Brown, a member of the BWA Commission on Religious Freedom, who had made visits to refugee camps in Ethiopia, which house refugees from Eritrea. Brown, lead author of the BWA report to the UPR, was a professor at East Texas Baptist University and is now chief of staff of 21st Century Wilberforce Initiative, a Christian human rights organization. The most recent of these firsthand testimonies were presented in February 2015 as part of the COI process.

One of these eyewitness testimonies stated, “The prison officials treated the Christian community differently than non-Christian prisoners. For instance, evangelical Christians in the prison were denied access to visits from families and friends. However, other faith groups were granted the privilege of seeing their family members and receiving food items.”

Another eyewitness declared, “As a follower of Christ, I was often not allowed to share a cell with another person. The guards were afraid I would proselytize. I did not have a Bible during this period. In fact, possession of a Bible would result in a punishment of several additional years of imprisonment. The officials kept telling me that I could not interact with others because I would spoil them and that my only chance for freedom was to betray Christ.”

“It is clear that gross human rights violations have occurred and that some of these violations cross the threshold of crimes against humanity,” said Bullock. “This report is the most comprehensive and detailed account of the violations perpetrated by the Eritrean government.”

The BWA report on Eritrea can be downloaded here.