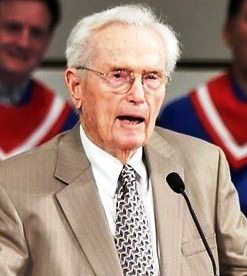 Duke McCall, president of the Baptist World Alliance (BWA) from 1980-1985, died on April 2 in the state of Florida in the United States. He was 98 years old.

McCall attended his first BWA event as a 16 year old in 1931, the Baptist Youth World Conference in Prague, Czechoslovakia (Now in the Czech Republic). After his election to the BWA Executive Committee in 1947, he held a number of other positions within the international body over the next several decades. He served as a member of the General Council, the Commission on Freedom, Justice and Peace and co-chaired the Commission on Baptist Doctrine. McCall participated in nomination committees and committees charged with reviewing the BWA constitution.

BWA President John Upton said “Dr. McCall was a big influence on my life as a student at Southern Baptist Theological Seminary while he was president. He was a true Baptist statesman, a world leader and a scholar.  His influence will be long lasting.  We are grateful for his leadership and friendship in the BWA.”

“I was among those who elected Duke McCall as BWA president at the 15th Baptist World Congress in Los Angeles in 1980,” said BWA General Secretary Neville Callam. “Soon after my election as BWA general secretary, I had the rich fortune of a memorable meeting with him during BWA celebrations in Atlanta, Georgia, in October 2007.”

Callam stated that “as BWA general secretary, I have had good reason, again and again, to review McCall’s addresses to the BWA Executive Committee and General Council. I have benefited from the expansiveness of his vision of the BWA mission, the depth of his appreciation for the extensiveness of BWA’s potential reach, and the deep commitment that marked his engagement to help BWA secure the physical infrastructure to support its ongoing ministry.”

Several significant developments occurred during McCall’s BWA presidency. He supported the internationalization of the organization, which had started in earnest in the 1970s. He endorsed the formation of and inclusion of regional bodies within the global organization, including the All Africa Baptist Fellowship and the Union of Baptists in Latin America, which gained formal recognition during McCall’s tenure.

McCall strongly advocated that the BWA provide travel scholarships to facilitate the attendance and participation of Baptist leaders from around the world at its gatherings and meetings. The decision to create such a fund was formalized in 1985.

The first Baptist International Conference on Theological Education, which is normally held every five years, was convened in the state of North Carolina in the United States in 1982.

It was during McCall’s presidency that a search began for more suitable offices for the BWA. A new headquarters building was purchased in McLean, Virginia, and dedicated in 1985, moving from its location in the heart of Washington, DC. The BWA moved to its present location in Falls Church, Virginia, in 2001.

McCall was a major figure of note among Baptists in the United States. He was president of the Baptist Bible Institute of New Orleans, now known as New Orleans Baptist Theological Seminary in 1943 and became executive secretary-treasurer of the Executive Committee of the Southern Baptist Convention in 1946.

He served as president of Southern Baptist Theological Seminary in the state of Kentucky from 1951 to 1982, during which time the student body grew from 800 to more than 2,000 students. Soon after becoming president, McCall integrated the seminary’s classrooms in defiance of Kentucky’s segregationist state law. At the height of the civil rights movement, McCall invited Martin Luther King Jr. to speak on campus.

He holds degrees from Furman University in South Carolina and Southern Seminary and is the recipient of several honorary doctoral degrees.

Callam said the BWA had plans to honor McCall. “What was intended as a surprise event is actually being planned for the upcoming BWA Annual Gathering in Ocho Rios, Jamaica, in July. It is a Joint Session being organized by the BWA Commission on Theological Education and Leadership Formation and the Commission on Ministry, where we are planning to celebrate the outstanding contribution of Duke Kimbrough McCall.”

Despite McCall’s passing, the BWA leader indicated that “the Joint Session will still be held, but in circumstances not as auspicious as earlier anticipated. Baptists around the world have lost a wonderful brother, a valiant witness and a disciple of Christ who was faithful to the end.”

McCall is survived by wife, Winona, and sons Duke Jr., Douglas, John, and Michael. He was predeceased by his first wife, Marguerite, in 1983.