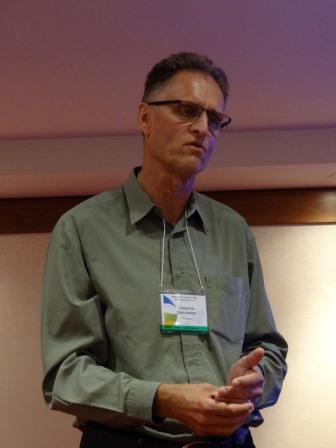 Christer Daelander, a Baptist World Alliance representative to the United Nations (UN) and religious freedom representative of the European Baptist Federation (EBF), is the nominee for the 2018 Denton and Janice Lotz Human Rights Award.

The nomination was announced to the Executive Committee of the BWA on March 7 at its meeting in Falls Church, Virginia, in the United States. The award is to be presented during the General Council meeting in Zurich, Switzerland, in July.

Established in 2006, the Denton and Janice Lotz Human Rights Award is given by the BWA for significant and effective activities to secure, protect, restore or preserve human rights.

It includes all rights stated in the Universal Declaration of Human Rights and other declared rights by UN bodies such as the General Assembly, the Security Council, the Economic and Social Council, the Trusteeship Council and the International Court of Justice.

Daelander, of Sweden, is an official BWA representative to the UN Human Rights Office in Geneva, Switzerland, working closely with representatives from the Vatican and other Christian traditions. He has engaged religious freedom issues in Europe, the Middle East and, especially, Central Asia.

Daelander provided firsthand accounts of religious freedom violations in Tajikistan and Azerbaijan to UN Periodic Reviews. He visited Central Asia making contacts with representatives of governments, embassies and organizations, such as the Organization for Security and Co-operation in Europe.

In November 2017, Daelander brought together key people from Christian minority communities in Central Asia, offering training and practical tools to defend religious freedom in their own context.

“Christer is a primary example of Baptist commitment to human rights and freedom,” declared BWA General Secretary Elijah Brown. “His deep faith in God and his commitment to the church exemplify the liberating power we have in Christ Jesus. We commend him for his loyalty, faith and service.”

The EBF said Daelander’s selflessness and faithfulness have “led to renewed action on behalf of human rights and religious liberty within our community.” He is Christ-like “in dealing with all” and is “a faithful advocate for authentic Baptist witness.”

Karin Wiborn, general secretary of the Swedish Christian Council, said, “Christer is doing outstanding advocacy work for human rights in the Uniting Church in Sweden, in the EBF and on the behalf of the BWA.”

Appreciation was expressed to the Uniting Church in Sweden, where he holds membership, for releasing him for this wider ministry.

Previous recipients of the award were Cynthia Maung of Myanmar/Thailand in 2017, Ilie Coada of Moldova in 2014, Glen Stassen of the United States in 2013, Edgar Palacios from El Salvador in 2012, Wati Aier of India in 2011, Leena Lavanya of India in 2009, Dennis Datta from Bangladesh in 2008, João and Nora Matwawana of Angola in 2007 and Gustavo Parajón from Nicaragua in 2006.