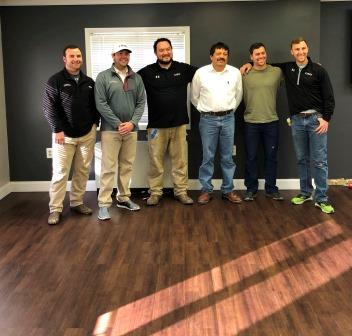 In early March, the Baptist World Alliance (BWA) renovated the second floor of its offices in Falls Church, Virginia, in the United States, in partnership with Dallas Baptist University (DBU).

The gift in kind resulted from a visit made to the school by BWA General Secretary Elijah Brown in January. DBU President Adam Wright made the commitment as a gesture of the historical bond between both institutions.

“Improvements to the building will enhance our capacity to pursue the mission of the BWA to network the Baptist family to impact the world for Christ,” Brown said. “I am grateful to DBU and, in particular, to President Adam Wright and to members of the DBU Physical Operations team led by DBU Vice President for Administrative Affairs Jonathan Teat.”

“For years, DBU has been honored to be a part of the Baptist World Alliance and we believe in the work that they do to act as a voice for the Baptist family around the world,” said Wright.

“We have known Dr. Elijah Brown for many years and were thrilled to see him named as the new head of this organization. As Dr. Brown seeks to begin this new season of growth and advancement in the history of the BWA, we could not be more pleased than to demonstrate our partnership and support by serving over spring break to help refresh their offices.”

DBU was founded in 1898 as Decatur Baptist College, the first two-year institution of higher education in Texas. It moved to Dallas, US, in 1965, went through a series of developments and growth, and was renamed DBU in 1985.

DBU chancellor and immediate past president, Gary Cook, is a former member of the BWA General Council, chair of the Promotion and Development Committee and a charter member of the General Secretary’s Circle. Other DBU faculty and former students have played important roles in BWA life.

“It’s been an honor to serve you. We are grateful to God to come and be a small part of what you’re all doing around the world,” said Teat. “As we worked we’ve been praying for the people that would be in this space. Our prayer is that this work is representative of the strong relationship that DBU has with the BWA.”

Brown said, “BWA looks forward to continuing to be a space of welcome for Baptists from around the world. We anticipate hosting an open house once the project has been fully completed.”