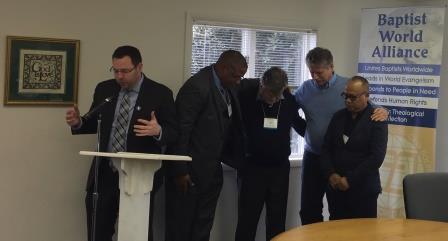 The Baptist World Alliance Executive Committee made important decisions and accepted several recommendations at its meetings in early March.

General Secretary Elijah Brown recommended and the Executive Committee unanimously affirmed that his immediate predecessor, Neville Callam, be named General Secretary Emeritus. The proposal is to be formally voted on by the General Council at its meeting in Zurich, Switzerland, in July.

The St. Vincent and the Grenadines Baptist Convention in the Caribbean was recommended to be received as the newest BWA member organization during the Annual Gathering of the global organization in Zurich.

The Executive Committee received the recommendation that Christer Daelander of Sweden, a BWA representative to the United Nations and religious freedom representative of the European Baptist Federation, receive the 2018 Denton and Janice Lotz Human Rights Award. The presentation will be made in Zurich in July.

An Evangelism Award continued to be developed that will be made to a Baptist congregation. Sponsored by the Kowloon International Baptist Church in Hong Kong, the award is being capitalized at US$250,000 and is to be awarded every five years, beginning in 2020.

A Baptist Forum for Aid and Development was created to work closely with both the director of Baptist World Aid (BWAid) and the BWAid Committee. Convened by the BWAid director, the forum will function as a space for collaboration and consultation between aid and development professionals and practitioners.

Brown announced he is in the process of creating a General Secretary Global Leadership Council comprising eminent Baptist leaders of repute who will act as advisors to the General Secretary. Inaugural members of this council are former BWA Presidents Billy Kim of South Korea and David Coffey of the United Kingdom.

The Baptist leaders and representatives from 25 countries, who met in Falls Church, Virginia, in the United States,  paid tribute to late American evangelist, Billy Graham.

Graham was lauded for his impact on Baptist life and Christian witness on a global level. In addition to speaking at every Baptist World Congress from 1955 to 1990, Graham collaborated with Baptists and other Christian groups in various countries in his evangelistic campaigns that spanned more than five decades.

Those present at the Executive Committee meeting wrote letters of solidarity and support to Baptists in Syria who have suffered much from the ongoing civil war and conflicts in the Middle Eastern country.

“I am grateful for the men and women who provide outstanding leadership to Baptists around the world,” Brown said. “They are at the forefront of Baptist life and witness and have given great support to the work and ministry of the BWA. I am thankful for their attendance and support at my first Executive Committee meeting as BWA General Secretary.”