BWA among global gathering on peace and justice in Italy 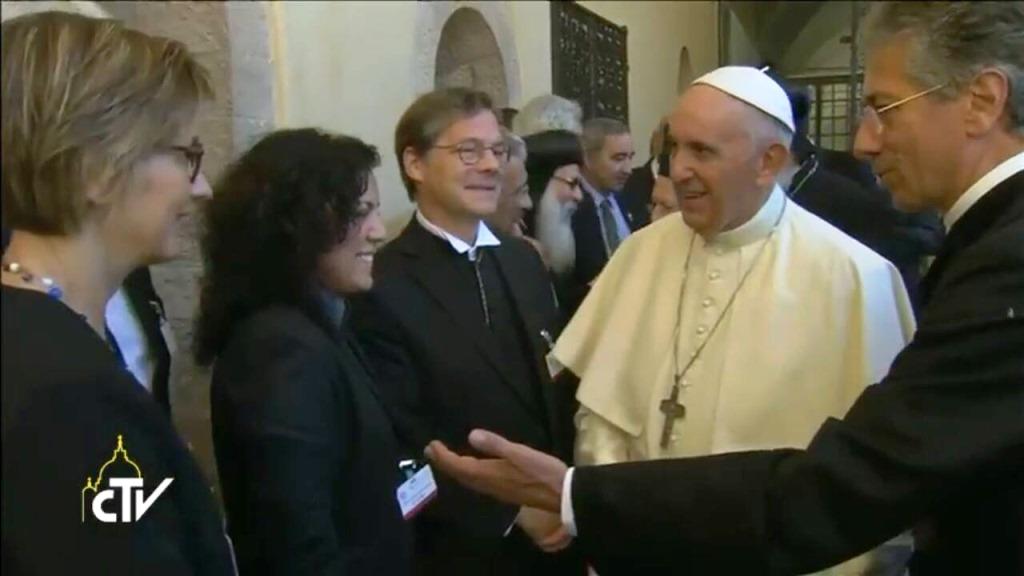 Dimitrina Oprenova of Bulgaria, a vice president of the Baptist World Alliance (BWA), was among a global gathering of 450 religious leaders of various Christian and faith traditions at the “THIRST FOR PEACE: Religions and Cultures in dialogue” in Assisi, Italy, from September 18-20.

Hosted by Pope Francis I, the event explored justice and peace issues such as economic inequality, poverty, war, terrorism, the integration of migrants and Christian-Muslim relationships.

Specific concerns, including conflicts and wars in Iraq, the horrors in Aleppo, Syria, the aftermath of the Jasmine Revolution in Tunisia, and the refugee challenges facing Europe, were also explored.

Oprenova, who was appointed by BWA General Secretary Neville Callam to represent him at the event, reported that “the spirit…was one of respect and value for all present.”

She said that among those invited to share in the event was “a group of refugees from countries that are experiencing tragedies of war.”

Pope Francis hosted prayers attended by Christian leaders and representatives, including Oprenova of the BWA; Orthodox Ecumenical Patriarch Bartolomew I; Justin Welby, Archbishop of Canterbury; Ignatius Aphrem II, Syrian Orthodox Patriarch of Antioch and all the East; and Olav Fykse Tveit, general secretary of the World Council of Churches.

“All main Orthodox, Protestant [and] Evangelical representatives sat at the very center of the podium from where the service was held, including the Baptist representative,” Oprenova confirmed.

“An Appeal for Peace was issued, read and then signed by the representatives,” Oprenova declared. “Small scrolls of the appeal were symbolically passed from the spiritual to the political leaders with the help of children. Young children were invited to come to the podium where the faith representatives gave the scroll appeals to the children who in return delivered it to the politicians and representatives sitting in the front rows.”

The 2016 gathering in Assisi was the 30th anniversary of the Day of Prayer for Peace promoted by Pope John Paul II in October 1986, where representatives of various religious traditions and cultures met for three days of dialogue and prayer.

The BWA attended prior meetings to follow the tradition of the 1986 gathering. In October 2011, General Secretary Callam and former President John Upton were among approximately 300 religious leaders who gathered in Assisi to participate in the Day of Reflection, Dialogue and Prayer for Peace and Justice in the World.