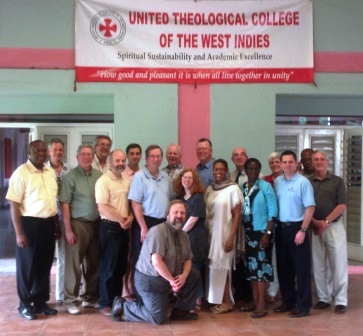 The Baptist World Alliance (BWA) joined other Christian traditions at a Consultation on Believers’ Baptism in Kingston, Jamaica, from January 8-10.

The consultation was convened under the auspices of the Conference of Secretaries of Christian World Communions for representatives of “believers’ baptism” church traditions to share their understandings and practices of baptism and to explore how thinking has changed in light of the emerging theological convergence on baptism and growing ecumenical encounter over the past 30 years.

The consultation affirmed that believers’ baptism is the most clearly attested practice of baptism in the New Testament and that the personal faith of the recipient and continuous participation in the life of the church are essential for the full fruit of baptism. Church representatives attending the conference also agreed that the pressures of contextuality have influenced the way churches understand and practice baptism.

However, infant baptism, which has developed within the Christian tradition, witnesses to valid Christian insights. A supportive believing community surrounding the infant will nurture the child’s personal faith as the child moves toward discipleship.

In response to the pressure of contextuality, the consultation concluded that those who baptize infants and those who baptize only believers may need to radically rethink their baptismal practices. They resolved that indiscriminate baptism, which represents an abuse, needs to be eliminated.

BWA General Secretary Neville Callam, a presenter at the consultation, gave an overview of the understanding and practice of baptism from a Baptist perspective, drawing upon the published reports of bilateral and trilateral dialogues involving Baptists in Europe, Asia Pacific and North America. He also surveyed the response of Baptists to the baptism section of Baptism, Eucharist and Ministry (BEM), published in 1982 and which, according to Callam, “continues to wield enormous influence in the ongoing life of the church.”

Acknowledging that “diversity marked the responses made by the Baptist groups” to BEM, Callam stated that some responses emphasized that Christian unity is not predicated fundamentally on baptism, some responses questioned the suggestion that infant baptism rests on the witness of the Bible, others expressed concern over a supposed equivalence between believers’ and infant baptism, and some raised questions about “re-baptism.”

These concerns and others, Callam said, featured in the discussion on baptism in many bilateral and multi-lateral theological discussions in which Baptists have participated since BEM. He declared that “the conviction that believers’ baptism remains the most clearly attested pattern of baptism in the New Testament and is a guide for those seeking to practice ‘New Testament Christianity’ persists among Baptists.”

A problem that some Baptists need to resolve, Callam indicated, was the relationship between baptism and church membership. There are instances of “apparent indiscriminate baptism,” as well as “the practice of admitting unbaptized persons into church membership.” Callam expressed the view that there is an “extreme form of open membership” practiced by some Baptist churches, which is based partly on the idea that baptism does not have instrumental value.

The more frequently practiced form of open membership, he asserted, was the most promising development that may aid constructive engagement between believers’ baptism and infant baptism traditions.