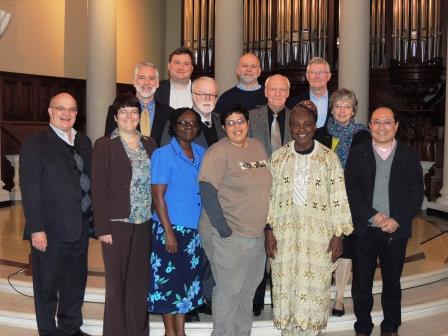 The Baptist World Alliance (BWA) and the World Methodist Council (WMC) will be engaged in the third session of the international theological dialogue between the two Christian World Communions. Both teams will meet at the Theological Seminary at Elstal, Germany, from February 3-10.

Previous sessions of the BWA/WMC dialogue were held in the United States in 2014 and in Singapore in 2015.

The week of meetings will cover the theme, “Making Disciples: Baptism as Christian Initiation” and will explore topics such as “Ecumenical conversations and agreements on baptism in Germany” and “Regional soundings on baptism from various parts of the world” such as Africa, Asia, Caribbean, Europe, Latin America and North America.

Historical, theological, liturgical and ecumenical perspectives and understandings of baptism will be explored.

Relevant excerpts from international and regional ecumenical texts regarding baptism are being selected, collated and distributed, with participants encouraged to contribute material from their respective region.

Other activities will include a tour of the German capital of Berlin and a visit to the birthplace of Martin Luther. Protestants, Baptists included, will mark the 500th anniversary of the start of the Protestant Reformation in 2017.

Luther had nailed 95 theses to the door of the Castle Church in Wittenberg, German, in 1517, an act that sparked the Protestant Reformation movement and a major break from the Roman Catholic Church.

The BWA delegation comprises dialogue Co-chair Curtis Freeman, research professor of theology and director of the Baptist House of Studies at Duke University Divinity School in the United States; Deji Isaac Ayegboyin, professor of Church History and African Christianity and at the Department of Religious Studies, University of Ibadan in Nigeria; Valérie Duval-Poujol, professor of biblical exegesis at the Catholic Institute, Paris, France, and director for its Institute for Bible and Orientalism; Timothy George, dean of Beeson Divinity School of Samford University in the US; Stephen Holmes, senior lecturer in theology at the University of St Andrews in Scotland; and R. L. Hnuni, principal of Calcutta Bible Seminary in Kolkata, India.

Methodist representatives are dialogue Co-chair Tim Macquiban, minister of Wesley Church and superintendent minister in the United Kingdom; Paul W. Chilcote, academic dean and professor of historical theology and Wesleyan Studies at Ashland Theological Seminary in the US; Christine Gooden-Benguche, secretary, Jamaica District Conference, Methodist Church of the Caribbean and the Americas; Lauren Claire Matthew, minister in the Umngeni Circuit, Natal Coastal District in South Africa, district supervisor of studies of the General Committee of Education for Mission and president of the Youth and Young Adult Committee of the WMC; Ulrike Schuler, professor for Church History, Methodism, and Ecumenism at Reutlingen School of Theology in Germany; and Malcolm Tan, pastor, Barker Road Methodist Church in Singapore.

BWA director of Mission, Evangelism and Theological Reflection, Fausto Vasconcelos, who serves as co-secretary along with Paul Chilcote, will also be present.