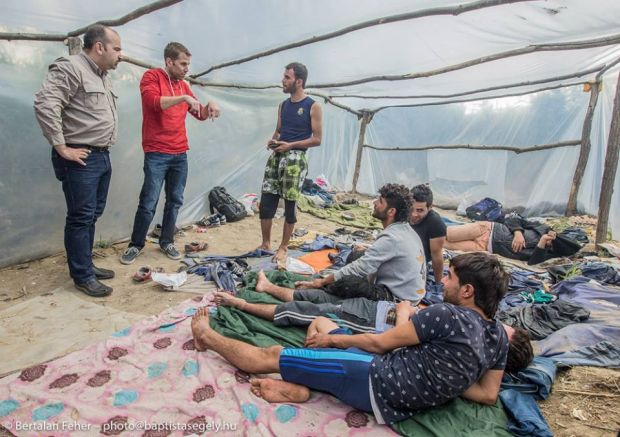 Baptists are providing assistance to refugees who are streaming into Europe. An initial sum of US$15,000 was sent by the Baptist World Alliance (BWA) through its relief and development arm, Baptist World Aid, to Hungarian Baptists to aid refugees in that country.

The 2015 European migrant crisis arose through the increasing number of refugees and migrants traveling to the European Union across the Mediterranean Sea or Southeast Europe. A majority of the refugees are from the Middle East, such as Syria, Yemen, and Iraq, and Africa, such as Eritrea, Somalia, and Sudan.

Bela Szilagyi, vice president of Hungarian Baptist Aid (HBAid), informed the BWA that HBAid’s temporary shelter is filled to capacity, indicating that this was the first such facility provided in the country for the refugees.

He said medical assistance has already been extended to some 700 refugees. “Most migrants who are ill suffer from upper respiratory issues, skin diseases, and swellings,” Szilagyi told the BWA. “Thirty percent of those seeking medical attention were children and 70 percent were adults.”

In addition, the Hungarians have distributed water and food at the Nyugati and Keleti train stations, as well as hygienic kits, medicine, disinfectants, diapers, baby food and toys.

“Many of our churches are busy responding to the challenge in many different ways,” said Thomas Klammt, commissioner for immigrants and refugees of the Union of Evangelical Free Churches in Germany. Congregations in Germany are “offering language courses, assistance in practical needs, even opening their houses and rooms for refugees to stay or find protection,” Klammt told the BWA. Guidelines to assist churches offering shelter in their “sanctuary” have been published.

In May of this year, Baptists in Germany passed a resolution titled “Welcoming Christ in the Stranger.” Klammt declared that the Baptist union “has appointed a representative to the church commission that is directly addressing the Government Department for Migration.”

Christoph Haus, general secretary of German-based EBM International, said that in Germany, “we expect a number of 40,000 during the upcoming weekend and the next week. Last weekend it has been 25,000.”

The Christian Council of Sweden has a committee working on migration issues, Johansson said. “We as a church are very keen that we, together with other organizations, support refugees and asylum seekers.”

The immigration crisis will be a major topic of discussion during meetings of the European Baptist Federation, one of six regional fellowships of the BWA, to be held in Sofia, Bulgaria, beginning on September 23.