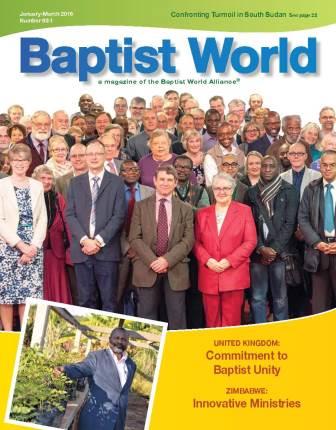 For the second year in a row, Baptist World, the quarterly magazine of the Baptist World Alliance (BWA), received an award from the Religion Communicators Council (RCC).

The periodical received the RCC Shoestring Award on March 31 during the DeRose-Hinkhouse Memorial Awards Ceremony in New York City in the United States. The Shoestring Award “is given to one winner across all categories on the basis of the highest quality/best product, for the lowest cost.”

In 2015, the October/December 2014 issue of the magazine won an award of excellence from the RCC for its attractiveness, use of images and color and content.

The DeRose-Hinkhouse Awards recognize the achievements of RCC members who demonstrate excellence as religion communicators.

Other Baptists received recognition at the award ceremony, an event held during the RCC annual convention, which was held from March 30 to April 3.

Brian Kaylor, vice chair of the BWA Communications Committee, won three Certificate of Merit awards: one for the partnership with Guatemalan Baptists in the February 2015 issue of the Churchnet digital magazine, and two for articles in Word & Way on the death penalty and on Union Mound Baptist Church.

Kaylor is generational engagement team leader for Churchnet and a contributing editor for Ethics Daily.

Word & Way, a newspaper published by Baptists in the state of Missouri in the United States, is edited by Bill Webb, a BWA Communications Committee member.

The Cooperative Baptist Fellowship (CBF) picked up Awards of Excellence for its Brand Rollout public relations campaign and the Offering for Global Missions fundraising campaign, and Certificates of Merit for Military Challenge Coin in the Special Print Material subcategory and its Logo and Visual Identity System.

Among those recognized for their CBF work were Jeff Huett, Aaron Weaver, Candice Young, Carrie McGuffin and Travis Peterson.

The Baptist Joint Committee for Religious Liberty, based in Washington, DC, in the US, received Certificates of Merit for the James Dunn Obituary by Cherilyn Crowe and for Don Byrd’s Blog from the Capital.

An Award of Excellence was received by Philip Poole and Janica York Carter for their work on the Baptist-affiliated Samford University 2014-2015 Annual Report.

Eron Henry, BWA associate director of Communications and editor of Baptist World magazine, was elected to the RCC Board of Directors for the period 2016-2019.