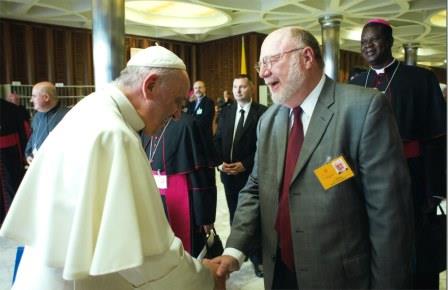 Roy Medley, fraternal delegate of the Baptist World Alliance (BWA) at the recent Synod of Bishops on the Family in Rome, urged the gathering “to emphasize the pastoral nature of the ministry which is entrusted to the whole church.”

Medley, who is chair of the BWA Commission on Interfaith Relations and the Membership Committee, as well as a member of the BWA General Council and Executive Committee, emphasized that “there is no perfect family and no perfect marriage.”

Rather, “in our broken world, families are not only a source of great blessing, they can also be a source of great harm as when a father molests his daughters, or brothers and sisters fight over inheritance. This is the pastoral reality: Families have their blessings and their dysfunctions.”

Medley, general secretary of American Baptist Churches USA, said the world longs for, but rarely expects, the presence of Christ. “Instead they see us abandoning them in the midst of their greatest personal struggles because of their irregular situations.”

Medley, who is also chair of the National Council of Churches USA, had joined the fraternal delegates to address the synod. These included representatives from the Orthodox, Methodist, Disciples of Christ and other Christian traditions.

The gathering, which convened from October 4-25, was in continuity with a similar synod in October 2014. It included Roman Catholic bishops from around the globe to discuss important issues facing families today.