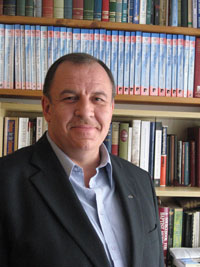 Baptist World Alliance General Secretary Callam has announced that internationally recognized Baptist scholar, Anthony R. Cross, will be the presenter at a special forum on baptism that will be included in the program of the upcoming BWA Annual Gathering.

The Gathering, which will take place in Bangkok, Thailand, from July 2-7, brings together an international group of Baptist leaders, theologians, teachers, pastors and other representatives for worship, fellowship, study, theological reflection and decision-making.

Anthony R. Cross is adjunct supervisor at The International Baptist Theological Study Centre in Amsterdam in the Netherlands.

He is author of two highly regarded books. His Baptism and Baptists: Theology and Practice in Twentieth-Century Britain (2000) has been described by David Bebbington of the University of Sterling as placing “twentieth-century Baptist convictions about baptism clearly in their context, showing with particular force how they have been affected by ecumenical involvement.”

His Recovering the Evangelical Sacrament: Baptisma Semper Reformandum (2012) is “highly recommended” by Timothy George of Beeson Seminary, Samford University. George likens the book to Beasley-Murray’s classic on baptism in that its author “brings new insight to the indispensable role of Christian initiation in both personal faith and the life of the church.”

With Philip Thompson, Cross co-edited Baptist Sacramentalism (2003) and Baptist Sacramentalism 2 (2006). The former is described by Barry Harvey of Baylor University as “a must read for all those seeking to come to terms with the central role played by the sacraments in the life and mission of the church.” Paul Fiddes of Oxford University describes the latter as opening out “new thinking on sacraments for the present day, for the benefit of the whole Church of Christ.”

Cross is editor of Ecumenism and History: Studies in Honour of John H. Y. Briggs (2002). He is one of the editors responsible for Semper Reformandum: Studies in Honour of Clark H. Pinnock (2003), Baptist Identities (2005), Global Baptist History (2006), On Being the Church (2006) and Recycling the Past or Researching History? (2006).

Cross, who will deliver two lectures entitled “Baptism – Who Cares? Baptists and Baptism in Recent Thought” and “Saved through Baptism: A Sacramental Baptist View,” will explore recent developments in Baptist understanding and practice of baptism, vis-à-vis the biblical mandate.

Admission to the lectures will be free to all participants in the Gathering as well as interested guests.

Correction: The following correction has been made to the story: “Anthony R. Cross is a member of the Faculty of Theology and Religion at the University of Oxford in England.” Cross no longer holds this position.