Africans ask for prayer on October 12 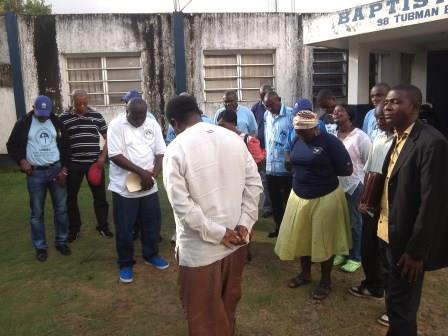 The All Africa Baptist Fellowship (AABF), one of six regional fellowships of the Baptist World Alliance (BWA), has called on all Baptists to make the Ebola outbreak a matter of prayer during worship on Sunday, October 12.

“All Africa Baptist Fellowship appreciates global Baptists for the love and concern shown to our brethren in Sierra Leone, Liberia and Guinea since the outbreak of Ebola epidemic,” the regional group said. “Particularly, we express deep appreciation to Baptist World Alliance for the leadership role played in bringing a coalition of concerned Baptist conventions, organizations and other bodies to respond to this deadly epidemic.”

The AABF has asked that prayers be offered for the comfort of families that lost loved ones; the healing of those who are infected; the protection of Ebola health workers; and an end to the Ebola outbreak.

The BWA has engaged other partners such as Brothers Brother Foundation and Baylor Scott and White Health system to ship medical supplies to Sierra Leone and will ship two containers of approximately 500,000 prepackaged meals to both countries.

Baptists have significant presence in much of West Africa. The Liberia Baptist Missionary and Educational Convention has approximately 72,000 members in 270 churches and the Baptist Convention of Sierra Leone has more than 21,500 members in 189 churches.